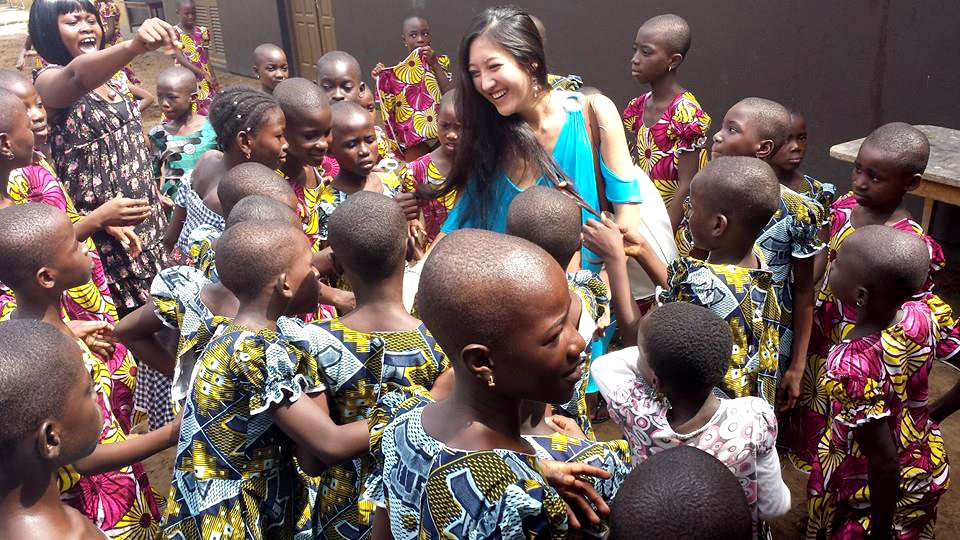 A WOMAN OF THE WORLD…

According to the Alsatian legend, Souls raining down from the sky are reincarnated as newborn babies, and then carried to the arms of parents by storks.

That’s how, Mi Kwan was born in Mulhouse and spent her childhood experiencing the « joie de vivre » and the gastronomy that Alsace has to offer in its unique and wonderful ways.

Zebus and lemurs will replace storks as the backdrop of her childhood…There, she was exposed to the world of poverty but also learnt that poor people, always smiling, are so generous that they can share their only bowl of rice with a stranger.

It’s in Madagascar that Mi Kwan takes her first steps on the stage with the musical “Emilie Jolie.” Years later, when she discovers the magic of theatre at the Avignon Theatre Festival (France) – with the comedy “The Chioggia scuffles” by Carlo Goldoni – she returns to Paris convinced she wants to play her whole life!

More colors were added to her emotional palette by studying with Blanche Salant (Paris) and Jack Waltzer (Paris & Los Angeles).

Mi Kwan then appears on many major French television as in « Bonne fête » for M6, « Inside the Jamel Comedy Club » for Canal+ and “Un mari idéal” for TF1.

The director Christian LARA casts her in the lead role in “The Legend” shot in French Polynesia and France, alongside Barry Primus. The Legend was in selection at the PAN AFRICAN FILM FESTIVAL of LOS ANGELES 2013, in competition diaspora at FESPACO (Ouagadougou, Burkina Faso) and in official competition at the FEMI (Guadeloupe) 2014.

“Mooncake” directed by Francois Yang allowed her the opportunity to reconnect with her Chinese roots while working on her role. This film won the Air Canada Best short film award at the Toronto Reel Asian Film festival 2014and won the Best Film Award at Paris Shanghai Film Festival 2015 – which she hosted.

She volunteered to do voice-overs for 19 PSA’s in partnership with Order of Malta and played in 2 first aid videos for The Red Cross.

She created an english-speaking weekly workshop for bilingual actors “The Amazings” to keep working on her craft.

Since, Mi Kwan played the female lead in the French-Ivorian feature film “Slave and courtesan” by Christian Lara, in competition at the PAN AFRICAN FILM FESTIVAL of LOS ANGELES 2016 and in the Korean feature film “A Korean in Paris” by Jeon Soo-Il.

The feature film « Un été en Provence », starring alongside Philippe Caroit, Jean-Michel Martial and Xavier Letourneur, will be released in movie theaters by the end of 2019.

Mi Kwan served as a jury member for the Miss Madagascar-France beauty pageant 2017. She is most recently noted for her work playing a supporting role in “Importantissime” for Canal+ and in the African TV show “River Hotel” (2017) for TV5 Monde and for portraying a Chinese astronaut in the American sci-fi feature film “Meta” (2017).

She made her directorial debut with the short film “Red Karma” (2018).

She has made Los Angeles her base of operations and continues to study under James Michael Marshall. She has since directed a mini-doc “Food is life” and two music videos for the rapper Bizzair, “Bougie” and “Alladin”.

As an actress, she starred as Ashley in the TV show “First List”, a Sheraton getaway commercial, and won the “UP(st)ART Artist of the Year” award 2018.